Fellowship of Fans > News  > Why Comparing the Rings of Power to Previous Tolkien Adaptations is Problematic: Christopher Thompson

Why Comparing the Rings of Power to Previous Tolkien Adaptations is Problematic: Christopher Thompson

To begin, let me ask you a simple question: Would you rationally compare Ralph Bakshi’s adaptation of the Lord of the Rings to Peter Jackson’s magnum opus trilogy? No, of course not. Because you really can’t. The same reason why you can’t compare Rankin and Bass’s take on the Hobbit to the live-action version. All four scenarios are wholly and completely different from one another (except for the comparison of Jackson’s Hobbit and Lord of the Rings films), and it would be unfair to all creators involved if we did compare the four. In fact, you would probably have an easier time comparing Bakshi’s Lord of the Rings to Rankin and Bass’s version of the Return of the King, given the similarities. That leads me to a very popular question that I’ve been asked multiple times since the beginning of this year. And that question is: Why are people so dead set on comparing the Rings of Power to Peter Jackson’s Lord of the Rings trilogy, even though they share nothing but the main title? Just look at the differences. One is a television series that follows the events of the Second Age of Middle-earth, and the other is a film trilogy based on the main storyline of the Third Age. As for the cast and crew, neither share any similarities. There are no returning actors to speak of, nor is there anybody behind the camera that was also on set 10 and 20 years ago, respectively. On top of all that, the Rings of Power is being made by Amazon, and the last I checked, Amazon isn’t New Line Cinema, nor is it Warner Bros. So that means neither share the same “cinematic universe,” if you will. In short, The Rings of Power isn’t PJ’s Lord of the Rings. It isn’t going to look identical, nor is it going to be presented the same way. Today I wanted to go over those reasons and why I believe that differences in adaptations can be both good and bad.

Starting off, I want to talk about something important. I want to talk about the story Amazon wants to tell and how it compares, or more so, how it doesn’t compare to other works of Tolkien. Almost five years ago (yes, it’s been that long), Amazon saw a golden opportunity to get their own “Game of Thrones.” They saw the opportunity to get the next fantasy phenomenon on their own streaming service, Amazon Prime Video. That’s when they saw the Lord of the Rings. See, the Lord of the Rings fits their criteria for success: If it’s big, makes lots of money, and is fantasy-themed, buy it. That’s what they wanted, and that’s what they got: the cream of the crop for fantasy storytelling. The shocking part is that they didn’t actually want to make the Lord of the Rings into a TV series. They wanted to experiment with the idea of making a prequel of some kind. That’s when they had the idea of “Hey, how about the Second Age?”

The main problem? Tolkien didn’t exactly make a “story” for the Second Age. He wrote an outline. A history, if you will, of what happened and how we got to where we are now (the Third Age). But that’s about it. There are characters, a lot of them, to be exact, but they don’t have a lot of dialogue. They’re just names on a sheet of paper with no personalities or mannerisms. There isn’t a strong-willed Samwise Gamgee, a smart-aleck Legolas, or a courageous yet fidgety Bilbo Baggins. Yes, some are written as being brave and compassionate, smart and headstrong. But those aren’t personalities that you can just rip out of the book and throw on screen. Those are characteristics that could be attributed to anybody. And that brings me to my point: the events in the Second Age are just that, events, not stories. They’re not the Lord of the Rings, The Hobbit, or even the Children of Hurin. They’re historical events that Tolkien included to give the Second Age a sense of reason. A bridge between the incredible tales of the First Age and hugely popular stories of the Third. And you know what? That’s a good thing. It gives creatives like Patrick McKay and JD Payne the starting point, mid-point, and endpoint they need in order to make a truly massive overarching story. It’s simply an outline, and amazon is using it to their advantage.

The next thing I want to point out is the form of media these two adaptations take and how adapting for television isn’t as easy as some people might make it out to be. See, on one hand, you have the Lord of the Rings and its film trilogy, and on the other, you have the events of the Second Age and the Rings of Power. As mentioned earlier, one of these lacks in source material, and the other, well, not so much. The Rings of Power is obviously the one that lacks in this department, and considering the form of media it takes, it arguably has more to prove. Not only do McKay and Payne have to add in a considerable amount of material due to the lack of, well, material, but also because they’re adapting for television and not film. With film, most of the time productions need to cut things from the book they’re adapting in order to shorten the run time. But with TV, you typically have more time to work with. In the case of the Rings of Power, that’s not necessarily a good thing, considering, once again, the lack of source material. This sort of revelation comes as no surprise to those who have already concluded that Amazon would have to add material to make the Rings of Power work. Those that still have a problem with the production believe there is enough written material out there for Amazon to base an entire series on – which there simply isn’t. I do find it extremely important, though, for Amazon to properly spread out the source material they do have in order to constitute the Rings of Power’s existence as a series.

The last point I want to make talks about what we’ve seen so far from the production and how it would be unfair to effectively compare 50 seconds of footage to 9+ hours of three films that have been in the public eye for 20 years. We’ve seen nothing more than a teaser trailer, yet people are already saying how it doesn’t look or feel like the Lord of the Rings. How is that a fair assumption when all you’ve seen is a 53-second teaser filled with character shots, title fonts, and overhead views of landmarks? Simple. It’s not. We as a fanbase have come accustomed to comparing everything to Jackson’s Lord of the Rings and leaving no room for new and different iterations. PJ’s Lord of the Rings is the gold standard. I get that. But just because something new comes along that doesn’t look identical to it, doesn’t mean it’s not the Lord of the Rings or doesn’t look or feel like it. We’ve made PJ’s Middle-earth the end all be all if you will, and that’s not a good thing. All I’m saying is don’t judge something so harshly or negatively solely because it isn’t what you’re used to. One person’s vision of Middle-earth might be different from the next person’s, and that’s okay. That’s the beauty of Tolkien’s writings. It’s a gateway for our imagination and the world he created is our playground.

Harry @FellowshipFans warned us on stream before that Episode 5 of #TheRingsofPowrer would be the most controversial episode lore wise and he was absolutely right. I try to explain what might be so triggering for book fans & ofc also review & critique it. 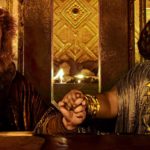 From Khazad-Dum to Moria: How the Dwarven realm will look in the Rings of Power