Fellowship of Fans > Exclusives  > The Lord of the Rings: The Rings of Power Episode 4: a Slipped Haliyard on a Proud, Moored Ship

The Lord of the Rings: The Rings of Power Episode 4: a Slipped Haliyard on a Proud, Moored Ship

Exclusives/ News
The title of The Rings of Power‘s fourth episode, “The Great Wave”, an allusion to later events, makes for a kind of microcosm of what this show had been thus far: an oft-glorious dream of premonition, all “gaping gates of steel and adamant.” Perhaps holding great promise behind them, the doors remain as of yet unopened.
Indeed, in this episode multiple characters are haunted by memories and presentiments. None come even close to Tar Miriel, who in the opening scene sees a deluge that would make biblical epics blush. That does, however, leave a little issue: the plot, which must be taking a vacation on that western shore that Isildur keeps hearing voices from.
Far be it from me to criticize a storyteller for taking his time: if anything, the slower tempo of these last two Wayne Che-Yip-helmed episodes was a powerful tonic to the freneticism of Ja Bayona’s two outings. That being said, we’ve been watching for four hours and seven minutes of what we’re told is an eight-hour season and we’re only just starting to move the plot.
Key to this is the introduction of the antagonist. Tearfully euthenizing the Orc that Arondir mortally-wounded, Joseph Mawle enters and immediately cuts a mysteriously menacing figure. In opposition, Bronwyn barricades the villagers in what’s, well, Helm’s Deep 2.0, really. Meanwhile her son Theo narrowly evades the Orcs, sniffing after the McGuffin he conceals.
All of this ought to put a fire under Galadriel’s entreaties for Miriel to intervene, but sadly the Elf’s rhetorics are still as clumsy as a snow Troll. So much so, in fact, that they get her thrown in the dungeon only for her to escape in an impotent fight scene. Even Earien’s seduction by Kemen (Leon Wedham), though stunted in the otherwise well-balanced edit, seem more convincing.
This is juxtaposed with a much more succesful mediator in the form of Elrond, still the show’s standout. He too sets his will against the secretivenss of Disa and Durin but Robert Aramyo does so with such dulcet tones as to make it hard to fault him. Even Peter Mullan’s mercurial Durin III – afforded one of the series’ most stirring scenes opposite his son – seems convinced by the half-Elf’s silver tongue.
Bookended with Miriel’s rallying speech for a Numenorean intervention force, the episode ends on an undeniable high-note, promising an end to the protracted buildup. It is regrettable, however, that Miriel’s heart is turned not on the strength of Galadriel’s adjurations but rather by a Deus Ex Arboris: the wilting leaves waft mesmeringly to the sound of Bear McCreary’s funebrial score, but in so doing all but strip Galadriel and Miriel of their agency.
Though she may not have proven her comptenence yet, it is undeniably poignant to see Galadriel humbled at the sight of human decrepitude, standing as she does at the feet of the bed of Miriel’s aged father. But the very image of the bedridden king in his opulent redoubt again encapsulates the issue that the waves of footage have yet to sweep away: halfway through season one, the board is set – beautifully so – but the pieces are not yet moving. ***1/2 out of *****
Share

Historian and perpetual Wagnerian, I had discovered the Lord of the Rings along with Tolkien’s other, multifarious writings after the release of The Fellowship of the Ring in 2001. As an avid filmgoer and writer, I take a particular interest in adaptations of Tolkien’s works – past, present and future, realized or otherwise – and participate with Fellowship’s podcasts in that capacity, researching and discussing the Amazon show. 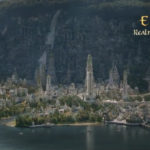 The Sword That Was Broken: “Adrift” 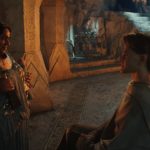 The Rings of Power: Our In-depth Analysis Of Episode Four “The Great Wave”